For more about botany in the Buckeye State, visit ohioplants.org, the companion to Ohio Plants, EEOB 2210.

The New York Times puplished an opinion piece by Gabriel Popkin with regards to what he terms “tree blindness”. He talks about educated, well informed people who have a variety of different fields, and careers and yet they know very little about what is growing around them. I mean besides the fact that trees literally sustain life, he also mentions how there was a time when tree identification could literally safe a life. By knowing how to distinguish poison from things that were edible as well as knowing what other uses or traits each tree had.

I am as tree blind as anyone. I have basic knowledge mostly from working with wood after it’s been cut down. I also have an appreciation for trees solidified by my time spent out on the West Coast where trees barely grow. However when it comes to identifying trees I was at a loss.

Identifying Trees
My tree-hunt began actually with a memory. I spend a good amount of time around the parks near Columbus because I have a dog who requires long walks. I have checked out almost all the parks around the area that have trails. The Antrim park I spent more than a few walks on last fall because they have trails in the woods. I remember seeing pods of some kind of nut on the ground when walking there. Armed with my newly found identifying criteria I went there and although I couldn’t find the area for that tree I found a host of others.

The first tree I found was a Hawthorn or Crataegus tree. The Peterson Field guide indicates that there are at least a thousand different types of this tree. They are differentiated from other trees by the presence of flowers, and thorns, but are difficult to differentiate between except by experts. So with this tree I was able to identify it by the simple alternate arrangement of the leaves. According to the website MIMAST.ORG although the leaves are highly variable between they are generally serrated. And are identifiable by a small 5 petal white flower in clusters. And with my sample although the flowers haven’t bloomed they are white and clustered. 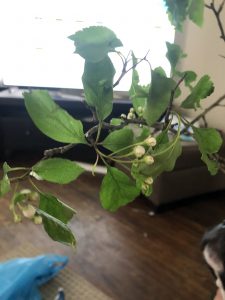 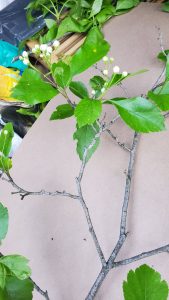 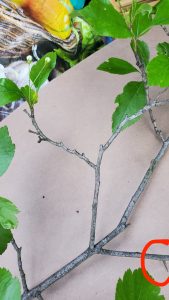 Sweetgum liquidambar styraciflua – while in the Antrim Park I encountered a tree with what The Peterson Field Guide describes as a 5 point star leaf. with corky branchlets and overcrowded with leaves. The real identifier for me was that the fruit were these small brown spiked “balls”. the fruit of the tree which differentiates it from other trees with star leaves. 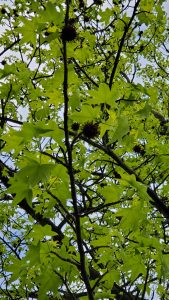 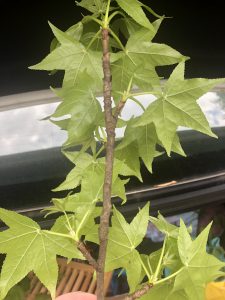 Another tree I identified also at the Antrim Park along the pond bank was a River Birch Tree or Betula Nigra L. The birch trees are specifically known for their peeling bark which exposes the inner bark. According to the Leaf Identification Key to Eighty-Eight Ohio Trees by the Ohio State University. As far as leaves go this tree has toothed alternate simple leaves less than four inches. according to the Leaf Identification Key. These leaves were only about 1”. edges serrated. 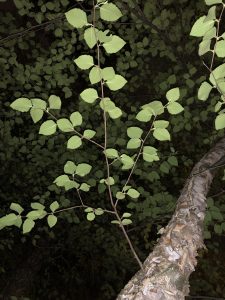 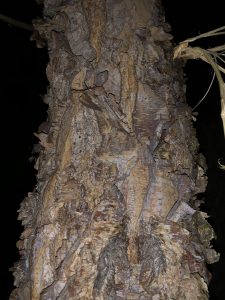 Here we have a Black Walnut Juglans nigra. It has an alternating pinnately compound leaf arrangement. lacking an end leaflet. Having dark bark according to the article “distinguishing ash from other common trees. from Michigan State University that describes that the twigs split lengthwise have the chambered pith. 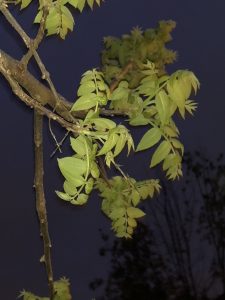 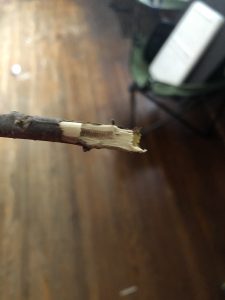 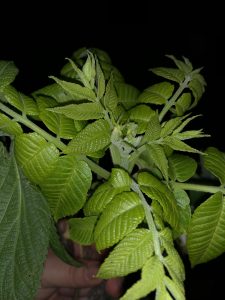 Although the photo does not depict this tree very well due to the petals of most of the flowers having started to die. I was also able to find in my own neighborhood in Old North Columbus a flowering dogwood also known as Cornus florida which the OSU Leaf Identification Key tells us has twigs that turn upwards with large white flowers in spring with petals similar to a leaf. This tree had large broad smooth opposite simple leaves. 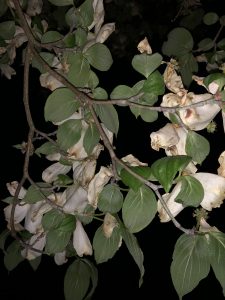 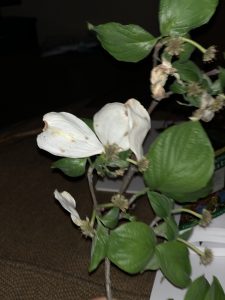 this has been such an interesting experience for me I found the experience to be a challenge hopefully I can become more adept and identifying the natural world around me.